How to Turn Your Video Game Idea Into Reality

With the rise of accessible gaming engines like Unity and Unreal, combined with the low barrier of entry to self-publish and market games, there’s no reason why you can’t turn your dream of developing your awesome idea into a reality.

There are many ways to collect inspiration, even for those who haven’t fully fleshed out their concept. Whether you’re looking for guidance on the development process, selling your game to a studio, or simply starting at square one, this article provides actionable tips to help ensure your game’s successful launch and lifespan.

How to Come Up with a Video Game Idea

There’s no one right way to come up with your first video game idea. You’ll likely end up combining a few of the methods listed below to get your creative juices flowing.

Two heads are always better than one, so don’t be afraid to reach out to your friends and other gamers to get their input on your burgeoning idea. Crowdsourcing can be a powerful tool to help shape the key demographic of your future game as well. If you want to test your fledgling concept on a larger scale, consider spitballing ideas with other gaming enthusiasts in a thread in Reddit or Quora. While you can always pull inspiration from certain aspects of your go-to’s, collaborating with other players will ultimately broaden your game’s reach and allow you to gain insight into which features you should include and which you should lose.

If you prefer to plan solo or are in the very early stage of developing your video game concept, one of the most enjoyable ways to get your imagination going is by consuming your favorite content. Books, TV, movies, and other games can unexpectedly trigger aha moments that advance your idea to the next level. Take an active approach to this exercise by keeping a notepad by your side so you can jot down moments, characters, audio, or design aspects that pique your interest.

Ideate in a Stream of Consciousness

If the ideas don’t come to you while you’re crowdsourcing, browsing or binge-watching, take some time to reflect on the feedback you collected and the content you consumed. Then, find a quiet place to sit down, set a timer for 10-15 minutes, and challenge yourself to write down everything that comes to you without stopping until time runs out. Practicing the stream of consciousness method allows you to express your thoughts on paper without judgment and prevents you from overthinking if it’s “good enough.” This method is particularly effective for visual learners because once the timer stops, you can see a visual representation of every thought swirling around your brain and begin to organize them.

If you’re drawing a blank and would rather leave your concept up to fate (AKA an algorithm), use the Game Idea Generator as your inspiration fail-safe. With one click of a button, it presents you with a unique combination of a potential genre, rule, setting, and theme for your game. You can generate up to a million combinations, so feel free to pick and choose which suggestions best fit the vision for your game. 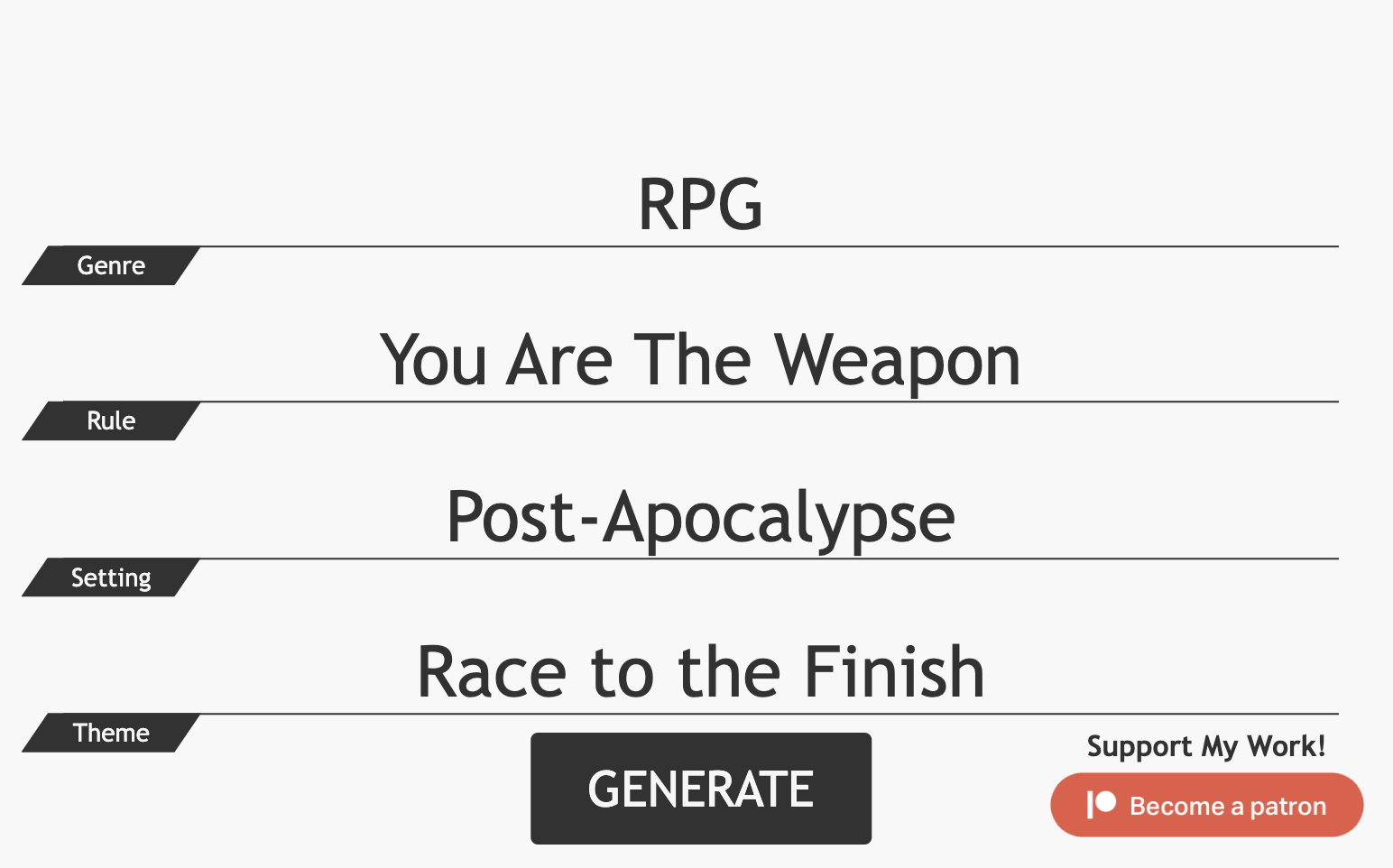 How to Develop a Video Game Idea

Once you’ve nailed down your idea, you’re ready to take the next step and begin the development process. It requires equal parts organization and imagination, but whether you’re part of a major studio or using Unity to create your very first game, you’ll need to move through these three stages to create a successful game.

Your GDD will serve as the foundation for the rest of your development project. It is a brief that should outline all major details like game mechanics, world-building, and storyline.

Your GDD should also answer any questions a potential audience might have about your game, from high-level concept down to the minutiae of aesthetic choices in both visual and audio design.

The purpose of this doc is to ensure that if you and your collaborators ever lose focus of the mission of your game, you can remind yourself of everything that makes it special, starting with the hook.

Your hook should answer the question, “What sets your game idea apart?” This could be anything from a thought-provoking concept, a twist on an old classic, or something that could revolutionize the industry. Think of your hook as a thesis statement of an essay. Once you verbalize the indescribable qualities that make your game special, it will be easier to map out the rest of your GDD.

Next, you should outline your game mechanics. The mechanics are the heart of gameplay and dictate what players do and why. This is where you’ll need to decide what the manual triggers should be and the outcomes for each of them.

Now comes the fun part. Developing your game’s storyline requires thinking about the dialog, characters, and emotions you want them to express. Your storyline will dictate the strategy of your game, the actions players will take, and set the stage for any sequels, so be sure to spend a little extra time looking at the story through a long-term lens.

The mood of your game refers to the sensory experience players will have. Think about the visuals and sounds that would elevate your storyline and the gameplay experience. The mood of your game serves as the first impression to gamers, so the design and vibe must be well thought out to set expectations and be cohesive with the rest of the game.

Before building your prototype, you’ll have to decide which programming language to use, if you’ll need to bring in another developer, and budget for resources that will save you time and money building certain features, like a gaming chat API. All of these factors depend on the format of your game. For example, mobile games won’t require as much tech as hardware-dependent games. Or, if you wish to add a messaging functionality to your title, you can lean on resources like Unity chat and Unreal chat tutorials. Once you take care of these housekeeping items, you can move on to scripting code for your game.

Building a prototype is a necessary part of the game development process. It’s the first time you’re able to see your idea come to life and gives you a chance to determine if what looked good on paper translates to the screen.

Finding areas of your game you want to improve during the prototype stage allows you to take swift action to resolve them before getting too deep into the development process. Be sure to carefully review the setting, dialog, world design, character motivations, storyline logic, and any other components of your game that will impact the user experience.

Your finalized prototype will need to be tested for quality assurance (QA) before it’s released. While you might be eager to hear opinions and praise from friends and fellow gamers, testing is a long and technical process that a QA expert should administer. This person will repeatedly play your game to ensure that they write a complete and detailed bug report, noting any glitches, crashes, and errors. Even if you’re only planning to self-publish and offer the game to others for free, no one wants to play a glitchy game, so it’s better to work out all of the kinks before pushing it live.

How to Sell a Video Game Idea

Depending on your ambitions for your game, you might hold out on self-publishing to make the perfect pitch to your dream studio. While the road to selling your video game idea is long and challenging, your patience and hard work could pay off.

Inquire with the Studio First

It’s important to research the studio and network with potential contacts you’d like to hear your pitch before reaching out to them. If you send an unsolicited email, it will probably be deleted, unread, or ignored. Studios of any size shy away from this type of cold outreach in case they listen to the idea, and it turns out to be the same one they had last year.

The studio might have spent time, money, and resources developing it in preparation for an upcoming launch. Studios risk potential lawsuits if the independent creator sees the new game released and thinks they stole their idea. A more successful approach would be to connect with the appropriate contact, ask them if they want to hear your idea, and offer to sign a nondisclosure agreement (NDA) to make it clear you’re not interested in taking legal action.

Just as your idea took on a new dynamic in the prototype phase, experiencing your game firsthand will make a greater impact on studio executives than simply hearing or reading about it. A flawless demo not only shows publishers that you’re serious about launching but also tells them that you understand the fundamentals of game development, technology limitations, development timelines, and financial commitments that go into making a single title. Your industry knowledge will set you apart from the other hopefuls who might not have a firm grasp, and therefore, unrealistic expectations of the potential studio partnership.

In the event that you fall head over heels for game design while developing your idea, one of the most direct ways to get your game noticed by a studio is to work there. Don’t just go for the biggest game company name when weighing your options.

Every studio has a different culture, preferred genre, and needs. Look for the ones that appeal most to you and would best fit your level of experience and working style.

If you’re ready to turn your passion into a professional career, getting a job at a studio will allow you to gain valuable experience and insight into the industry. You’ll learn how to perfect your game and your pitch while simultaneously connecting with decision-makers who will be more likely to green-light your project. Not only will this mitigate the risk of litigation against the studio, but it also allows them to assume less financial risk. This is because they know if they were to take on your title because they know you, along with the rest of your team, are invested in making it a success.

There’s no cheat code you can use to come up with a great video game idea. From ideation to implementation, it takes a lot of hard work and determination. If you’re up for the challenge, a solid GDD will set the tone for an intentional, inspirational building and testing experience. And just as there’s no one right way to come up with your idea, there’s no one right path to getting your game in the hands of players.

The big studio pitch route might be difficult, but if accomplished, it could yield more success than if you were to self-publish. But self-publishing has its advantages, too. It allows you to retain greater creative control over your game, and the hands-on nature of self-marketing will offer a richer learning experience than if you were to hand over the keys to a studio.